Written by Abraham Galvan on November 9, 2021 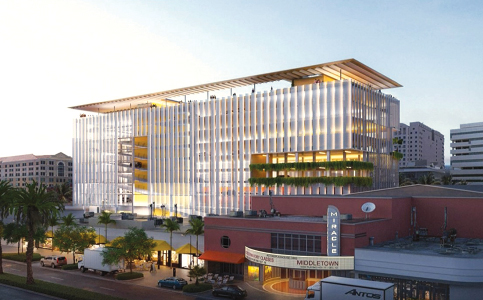 Coral Gables commissioners re-examined the evolution of the city’s mobility hub on Tuesday and suggested detailed improvements moving forward. Then, despite some concerns about the appearance of a modern building, they voted to move the project forward.

During the committee meeting, city officials gave their opinion on what should be added to the design of the Coral Gables Mobility Center at 245 Andalusia Avenue, which is expected to be completed by the first quarter of 2024.

After architectural firm Gensler finished their presentation, Mayor Vince Lago suggested having cycle paths and partnering with neighboring businesses to beautify the area surrounding the center.

“I would engage with Mr. Stephen Bittel from Terranova, who owns these adjacent properties and ask him to become a voluntary participant and become a team player,” said Mayor Lago. â€œSince the investment we’re making is so big, I think it’s in the best interestâ€¦ through the CEO, someone should sit down with Stephen Bittel and have a conversation with him to see how we can find a partnership for what we’re going to see in the alley.

“I promise you this, I won’t support things that don’t have the first floor (of the hub) taken care of because I don’t want to watch from Andalusia [Avenue] by the first floor and I have to see this horrible alley, â€added the mayor.

The other discussion the mayor raised and addressed was cycling connectivity and dedicated bike lanes.

â€œSo how do we make sure that we take into account that people can walk through our city? Let’s say we are using Andalusia, what can we do to activate and make the use of bicycles as safe as possible for people if this is to be the main corridor for people to cycle on the street? Asked Mayor Lago. â€œLet’s try to find something that’s out of the norm, it’s a striped reserved lane or whatever. Let us distinguish the options available to us, because I want this committee to take a decision on these links.

After hearing conflicting views from several residents on the design of the mobility hub, Deputy Mayor Michael Mena was not in favor of converting the hub into a traditional Mediterranean-style building.

â€œI don’t want to downplay the views. It’s a fair point of view that â€œhey, we would like that to be more traditional and aesthetic of the cityâ€, I get it. I happen to disagree, â€said the vice-mayor. â€œI think this is a great opportunity to do something a little more unique, something that has a bigger impact on our downtown business community. And after talking to business owners, they research this.

Mayor Lago suggested moving the project forward and having a Sunshine meeting with the architects later.

The mobility hub is only in the design phase, added Vice-Mayor Mena. “I think what you’re hearing from us is that we want you (Gensler) to address the concerns that we have.”

“I am ready to vote on the bones of the product today and we will come back to the next committee meeting and vote on the skin,” said Mayor Lago and launched the motion, which was approved.

Tim Blanks, editor-in-chief of The Business of Fashion, is the mentor of the Master in Fashion Critique and Curation at Polimoda. At the Italian Fashion School, Blanks will put his experience and knowledge at the disposal of the next generation of fashion critics and curators, trying to encourage students who “come out into the world […]

Every month hundreds of galleries feature new exhibitions on the Artnet gallery network and every week we highlight the exhibits we think you should see. Find out what we have in store and inquire with just a click. What would you like to know: The mononym GGerman artist Meuser presents 14 recent sculptures in â€œClose […]

British studio Locksmith Animation’s debut feature, “Ron’s Gone Wrong” has plenty of slapstick and small humor for kids. But adults will also be intrigued by his often scathing (albeit somewhat contradictory) critique of consumerism. Barney (voiced by Jack Dylan Grazer) is the only kid in his middle school who doesn’t have a B-bot, a personalized […]