‘Tea Day 1930’ by Edward Volkerts paints a magnificent picture of the teas that stood on the lawn in front of the old Lyme Art Association. A â€œtea dayâ€ is part of AAL’s centenary celebrations this Saturday. Image courtesy of the Volkerts family.

OLD LYME – Saturday August 7, the Lyme Art Association (LAA) celebrates the 100th anniversary of the opening of its gallery. Several special events are planned, including a tea party on the LAA lawn.

Although the gallery itself opened in August 1921, the history of the LAA goes back even further and is linked to our municipal library and the Florence Griswold Museum.

To start at the very beginning – in 1899, Henry Ward Ranger, already an established painter, arrived at Old Lyme and moved into Florence Griswold’s boarding house. Ranger was so enamored with the beauty of the area and the quality of the light that he began to envision the village as a colony of American art.

He wrote to his agent in New York that Lyme was a landscape waiting to be painted and told Miss Florence that he would be back next summer and bring other painters with him. And so the artists came. 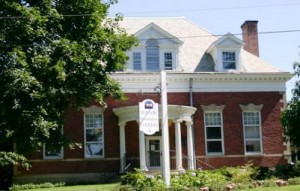 The Phoebe Griffin Noyes Library was the original home of the Lyme Art Colony’s summer exhibition from 1902 to 1920 before the Lyme Art Association had its own building.

And in 1902, artists started a summer tradition by hosting an exhibit at the Phoebe Griffin Noyes Library. An article in the Hartford Current explained that “the library and the artists have formed a kind of close corporation”. The library (which opened in 1898, the year before Ranger arrived) needed funds to purchase books; artists needed an exhibition space.

“One scheme after another was attempted until someone thought of asking artists who spend their summers in town to exhibit some of their paintings.” Running reporter wrote. Admission to the show was 50 cents and the proceeds were for the benefit of the library. In addition, the library received a percentage of all paintings sold.

It was the start of a beautiful friendship and the shows were a success from the start. As the fame of the Lyme Art Colony grew, artists began to plan to build their own gallery. Many of them settled permanently in the city and in 1914 incorporated as the Lyme Art Association. But the shows continued at the library until 1920.

It took years both to raise funds and to decide on the best location for the new building. One of the options was a piece of Miss Florence’s property that overlooked Lyme Street. World War I also intervened – not to mention this American art news described as a “merry war” between the artists over the design of the gallery.

Finally, on August 6, 1921, the LAA gallery was ready for its close-up and opened at 90 Lyme Street, next to Miss Florence’s boarding house. In his review of the opening, the New York Times praised the gallery “as an embodiment of art in harmony with its natural surroundings”.

Miss Florence becomes the first gallery owner and will remain so until her death in 1937. 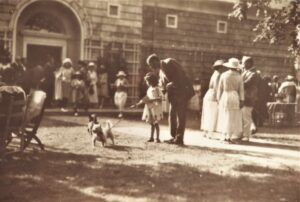 Tea on the LAA lawn.

During the years of the early library exhibits, the Ladies’ Library Association served tea on the lawn. And the artists continued this tea time tradition in the new gallery. Tea has been served outside at the LAA on Wednesday and Saturday afternoon. The above painting by Edward Volkert, which appears on the poster for the Centennial Show, represents one of those â€œtea daysâ€.

Several women who helped serve tea at LAA as teenagers were interviewed for an article published in The pictorial gazette in 1988. They remembered the lace tablecloths and the fact that the ladies wore “long, vaporous dresses in every pastel color imaginable”. They also recalled large floppy hats; white gloves; and ginger and cream cheese sandwiches.

But all was not perfect in this pastel paradise. One of the women noted that at the age of 12, she was shocked at the first sight of a woman smoking, which was “unheard of in this city”.

And this Saturday afternoon, the 100e anniversary of the opening of the gallery, the LAA will once again organize a tea party. There will be refreshments and family activities on the lawn before 1 p.m. to 4 p.m.

Inside the gallery, the current exhibition is ‘A Century of Inspiration’, for which today’s artists have created painted works on many sites that the ‘old masters’ of Old Lyme have immortalized. one century ago. And throughout the day, you can observe LAA artists up close as they paint at various locations along Lyme Street.

So much has changed in the world over the past century and we no longer live in a distinguished era of outdoor snacking. Right now, we are even living in the midst of a global pandemic.

But some things haven’t changed.

Old Lyme is still the beautiful village that Ranger first saw in 1899. Every May and June, Mountain Laurel is still blooming. And 100 years after the opening of the LAA, painters continue to draw inspiration from the natural beauty of our city and exhibit works of art in the gallery.

Editor’s Note: Visit this link for details on all of the events planned for AAL Centennial Day.

The Art Association of Jacksonville is celebrating its 65th Fine Arts Ball, with the theme “Sapphire Soirée” in honor of the occasion. The annual event, scheduled for April 23, serves as the association’s main fundraiser, with proceeds used to promote art appreciation and education for all ages at the David Art Gallery. Strawn. The theme […]

The Monterey History and Art Association receives tax relief through the county appeal board. | New

[ad_1] The Stanton Center on Custom House Plaza in Monterey was the scene of a celebration on Wednesday evening June 16, with a dedication ceremony for the Monterey Peninsula Chamber of Commerce and two shows featuring a team of husband magicians and wife live from Las Vegas for the opening of the Monterey Magic & […]