Martine Syms’ solo exhibition, She Mad Season One, is a conceptual project in the form of a semi-autobiographical television show. Unfolding through episodes made between 2015 and 2021, the experimental sitcom follows a young graphic designer, also named Martine and also living in Los Angeles, as she attempts to make it as an artist. Composed of five video works installed on either side of a zigzag metal structure that crosses the gallery, She Mad draws on staged scenes, clips from television shows, social networks and memes to sketch a story around Martine’s daily life.

Syms is best known for her video work that centers the portrayal of black people in popular culture, often through satire and digital media. Referring to herself as a “conceptual entrepreneur”, Syms has a practice elastic enough to encompass not only work in all media, including graphic design and publishing, but also branding projects – her collaborators include Prada, Nike x Off White and Kanye. West. Syms situates this work as part of a larger practice between art and life, and as a pragmatic question of survival as an artist.

But she is also notable for producing video work that is sometimes cinematic and narrative, sometimes analytical and sometimes, as in She Mad, non-linear and experimental. While TV clips feature prominently in these videos, She Mad is itself distinctly TV-like. There are no character or plot arcs, although there is a catchy opening jingle. The project has the feel of a series of visual notes on the making of a future show, rather than the outline of a readable series on its own.

This effect is amplified by the montage of snapshot-like photos from Syms’ personal archives that scroll between each screening: empty parking lots, hands removing candles from a birthday cake, giant teddy bears slumped in rolling office chairs, the album cover of a band whose name is a racial slur, palm trees against a glass building, the contents of a refrigerator. Shot in the vein of what I consider art school vernacular – bad flash, diagonal composition, a vague sense of alienation, a blurring of the urgent and the mundane – the images scroll across each of the five screens. These recurring photos give the exhibit a muted ethnographic quality, as if viewing the contents of someone’s Google Drive in its entirety.

This makes sense, given Syms’ continued focus on everyday narratives of black cultural production. In her 2013 book, The Mundane Afrofuturist Manifesto, she critiques central tenets of Afrofuturism (“the link between the Middle Passage and space travel is tenuous at best”) and instead praises a sort of daily darkness. In a cultural context that too often presents black characters as eternal “others”, sensationalizes black suffering, or completely erases identity and structural violence, Syms is interested in the political possibilities of black banality. In Intro to Threat Modeling (2017), a 3D modeled representation of the artist dances in a t-shirt emblazoned with the text “To Hell With My Suffering”. 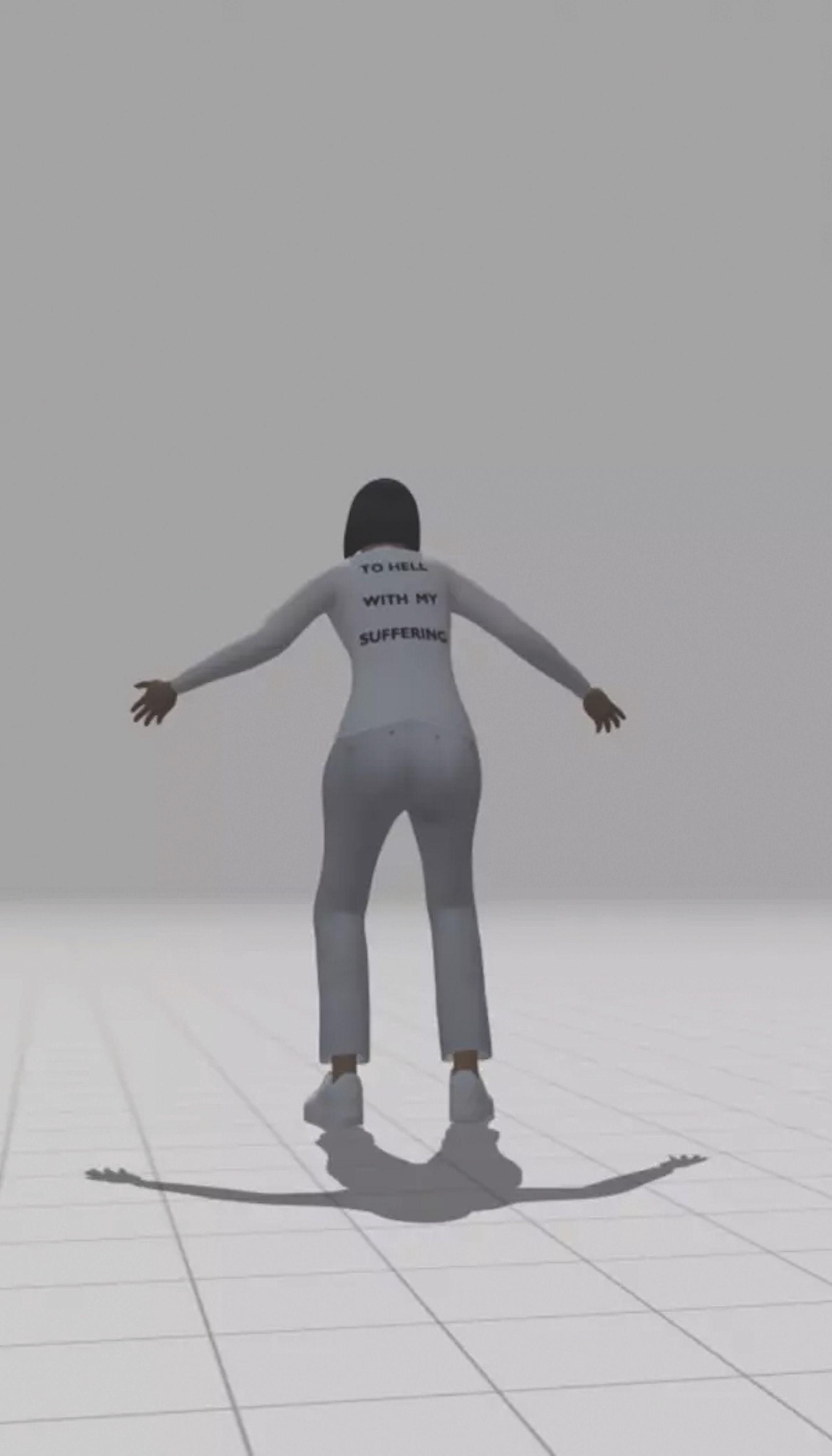 Within the context of this larger atmospheric project, moments of narrative or theoretical clarity take on added importance in shaping the work as a whole. One such touchpoint is the plot of the work’s second video, Laughing Gas (2016), which references an early silent film in which a woman visits a dentist who gives her nitrous oxide. ‘nitrogen. In the Syms video, Martine suffers the same fate. She is seen during a dental appointment, scrolling through her phone on the exam chair; shortly after her wisdom teeth were removed, a dental assistant informed her that the $1,700 bill was not being forwarded to her insurance and asked her if she had another way to pay (“Can you -be called dad?”). Martine runs away from the office and gets on a bus, but as she is gassed, she can’t stop laughing. The scene recalls both the history of medical abuse against black Americans as well as the costly farce that is the American healthcare system.

But it’s a moment in the series’ first play, A Pilot For a Show About Nowhere (2015), that suggests why Syms eschewed narrative convention for this project. Framed as a pilot episode for the season, it begins with Martine imagining what the series would look like. “The opening sequence would have a set shot of Los Angeles. Probably the 1-10-10 interchange downtown, none of that Hollywood crap,” Martine says as the narrator. The episode runs through clips from early shows and the long history of racist stereotyping in film and television; Syms traces the first sitcom to a radio show voiced by two white actors in blackface, which was in turn based on a minstrel show. In one of several talking head segments that discuss television and the portrayal of black people, an interview subject notes that although The Cosby Show was able to appeal to many black viewers because it presented its affluent characters as a normal family faced with daily problems, it also erased all of the real challenges faced by poor and working-class black people. Avoiding clear representation or linear narrative altogether, what Syms suggests with She Mad is a strategy to avoid those pitfalls as well. It cannot miss about itself, because its subject refuses to be contained.

One of the possibilities offered by the presentation of television works in an exhibition space is to play on the sense of linearity between episodes. Syms makes convincing use of audio, with the sound of one video blending into that of another. The steel structure that runs through the space – painted dark purple (Syms said her signature use of this tone makes people say “the color purple” out loud, referencing Alice Walker’s famous 1982 novel ) – also allows easy movement between episodes in any order: although placed chronologically, going from right to left, the screens are installed on either side of the frame, and gaps between the beams facilitate moving from one viewing area to another. 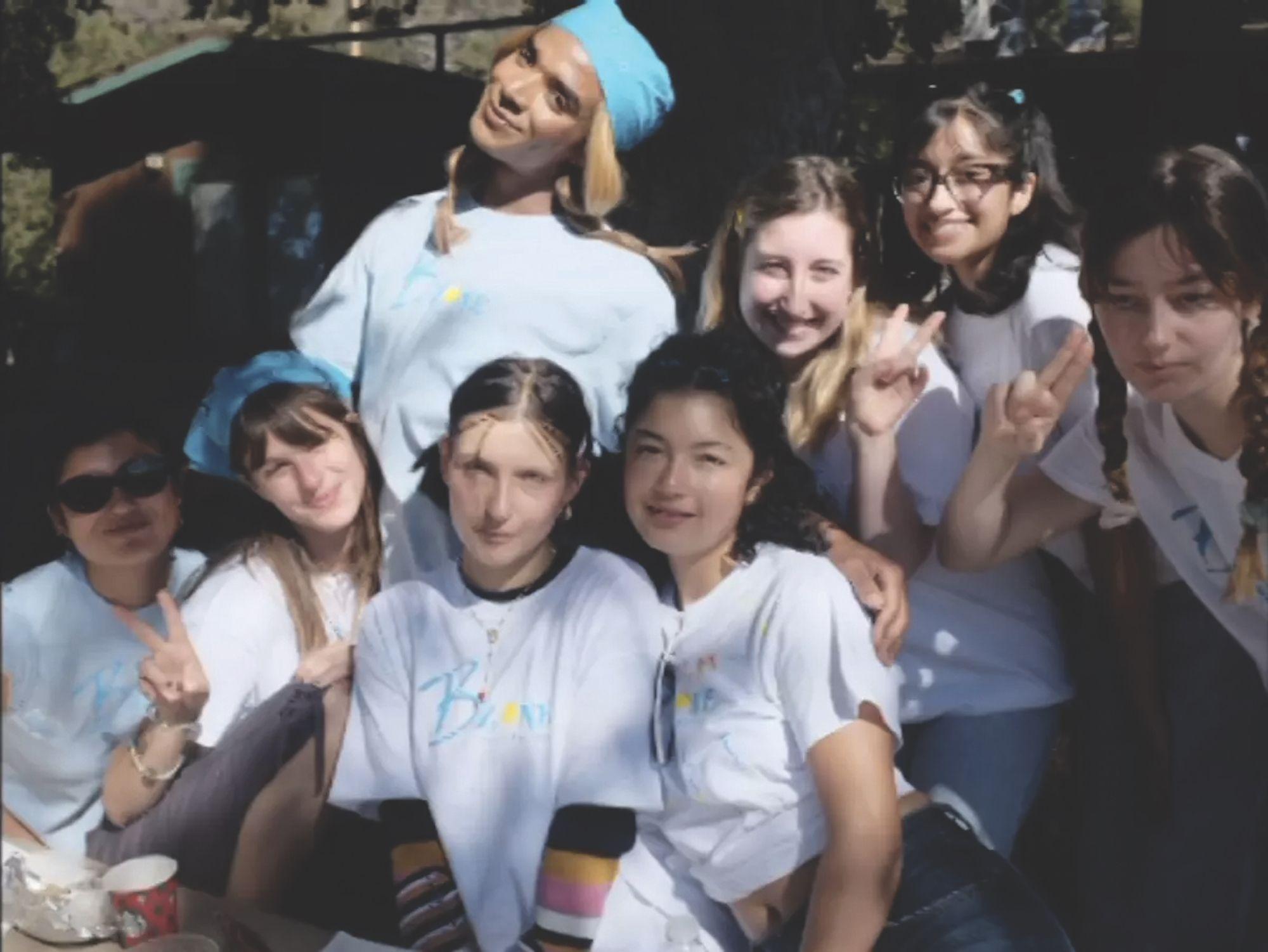 The latest episode of She Mad, called Bitch Zone (2020), which plays on a large transparent LED screen placed in the back corner of the steel structure, parodies the artist’s real-life experience of attending a camp. been at 13 led by supermodel Tyra Banks. Set in the year 2000, the scene is acted out by Syms’ contemporaries (their impeccable sense of early 2000s fashion – center partings, puka shell necklaces and all – lends the veracity of the era). A character named BBQ takes the stage in front of the seated campers and launches into a motivational speech about body positivity.

The painting takes on a garish quality, however, when the barbecue invites the young women to play in what is meant to be a teambuilding activity. Because race isn’t discussed enough in the United States, she says, it’s time to expose it openly by saying different racial stereotypes out loud. “Whites can’t digest spices,” says one camper; another responds: “Black people have thick fingernails. “Asians don’t have sweat glands,” shouts a third. Shot in red and black, the group grow increasingly enraged and the camera pans up as they begin to attack each other.

It’s a poignant end to She Mad, the show and the season. It’s both humorous and almost insurmountably dark in its satire on how talking about identity and structural violence is strained in a country so deluded by its own history that the teaching of slavery in the school curricula remains a divisive issue. In Bitch Zone, Syms’ camera revels in chaos, turning pain into entertainment. And as spectators, we too participate in the spectacle. avoid it.


Legal disclaimer: MENAFN provides the information “as is” without warranty of any kind. We assume no responsibility for the accuracy, content, images, videos, licensing, completeness, legality or reliability of any information in this article. If you have any complaints or copyright issues related to this article, please contact the provider above.

This year marks the 350e anniversary of Rembrandt’s death in 1669. To commemorate this landmark event, the Getty Museum has announced the relaunch of a website that features high-resolution images of 14 of the Old Dutch masters’ paintings all of which belong to southern collections of California. Title Rembrandt in Southern California, the site is […]

In Contemporary Dance Practices, a recent addition to the Core Curriculum, students take time between discussions of different aesthetic theories, the influence of pop culture, and the privilege of Western perspectives in dance criticism to engage in a real practice of movement, learning a wide variety of techniques and styles. In another class, this one […]

10 years after they were first uttered by Elizabeth Woolridge Grant, the words “My pussy tastes like Pepsi cola” remain immortal in the cultural imagination. The line – from the luxury version of Lana Del Rey Born to die, his unforgettable major-label debut – is a quintessential example of the fantastical, humorous portrayals of Americana […]